TWO in the MORNING
1

Backstory:
Based on my La Ronde Project scene for Naked Angels.  Adapted into a screenplay for AFI's Directing Workshop for Women,
for which I was a finalist.  Then produced and filmed it myself (the first Stevedore Production) as a demo to garner interest in my screenplays, it did land me an option to direct my first feature, until financing fell through.
Filmed over a weekend in a Downtown Los Angeles apartment with a visible skyline, in an attempt to create a New York City vibe.
We got a little more grit than expected when, across the street from all our location (with some crew and my cinematographer outside filming through an open window), a shootout in MacArthur Park, at two in the morning (no kidding), sent the entire cast and crew diving for cover.  My clear-thinking line-producer, lying on the sidewalk under a payphone, reached up, called the cops, and once sirens were heard, I gave the all clear for shooting (film) to resume. 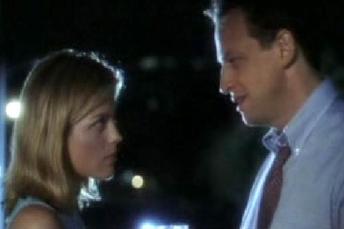